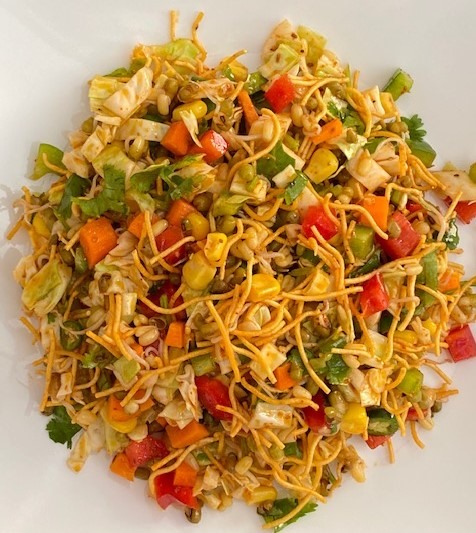 Mix well and set aside Get a large salad bowl and set aside Take the sprouted moong beans in a small glass bowl, cover with a wet paper towel. Cook the moong beans in the microwave for 4 minutes. You do not need to add any water to cook the beans. Remove from the microwave and drain out any liquid that was formed in the bowl. Spread it out in the large mixing bowl so it starts to cool. Next take the frozen corn kernels and cook in the microwave (no water added) for 2 minutes. Drain out any liquid and sprinkle over the moong beans to cool. Start chopping each of the vegetables and cilantro and keep adding over the cooled moong beans and corn kernels. Now add in the Sev and salad dressing. Toss well and serve immediately. VARIATION: You can substitute the sprouted moong beans for cooked garbanzo beans Replace corn kernels with finely diced cucumber Replace the Sev with crumbled pita chips or potato shoestring [Makes 4 servings]