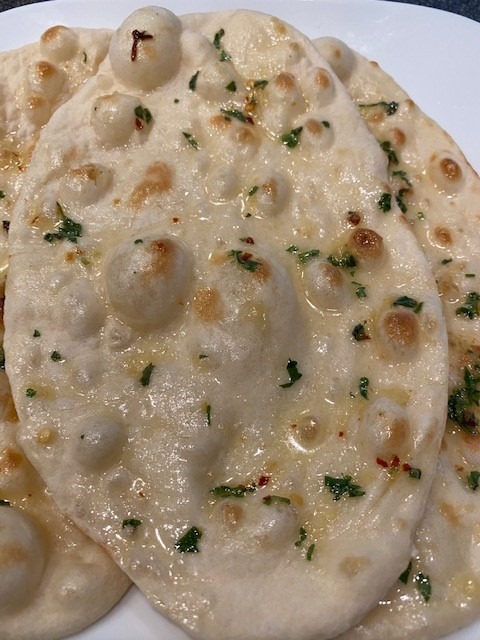 Homemade Naan that looks like it just came out of the tandoor oven!
Ingredients:

To make the dough: Mix all the dry ingredients in a bowl. Add the oil and mix well. Now add the yogurt and then the milk as needed to make a soft dough. Knead the dough until smooth. Cover and rest for about 20-30 minutes. Divide the dough in 12 parts. The cooking process is in two steps to achieve the tandoor look. On the stove top, heat a tava on medium heat, and also; Heat the oven on broil setting (500 degrees F), making sure the oven rack is on the highest level. To make the naan: Keep a small bowl of water where you will roll the naan. Start rolling the first dough ball on a board or a clean counter top with the help of some all-purpose flour. Roll in an oblong shape to the thickness you like. Make a few small cuts with a plastic knife (to prevent it from puffing).  Pick up the naan in one palm, wet the other palm with water and moisten the side of the naan facing you. Go to the heated tava on the stove and slap the wet side of the naan on the tava. You will see bubbles appear almost immediately. Cook on the stove top for 15 seconds and then without touching the naan, take the tava to the oven and place it under the broiler. Make sure the oven door is open at all times. The naan will start to cook and make bigger bubbles on the top. Keep an eye while it’s cooking under the broiler till you see some brown spots appear. The naan is now cooked. Remove from the oven and peel off the naan from the tava. Butter the naan with the spread and serve immediately. Repeat the process for the remainder of the dough balls. Each Naan takes a total of about two minutes to cook. NOTE: The spread is our family favorite but you can serve the naan plain, or with just ghee or butter. The choice is yours! [Serves 4-6]